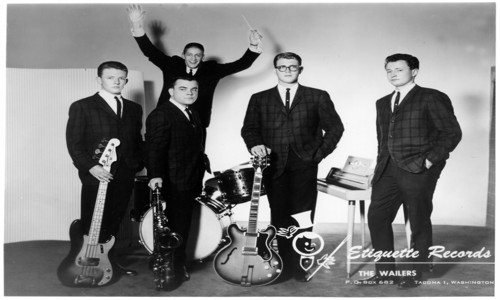 It was the end of summer 1960 on a Sunday, sitting around a table at a nightclub in Tacoma called the New Yorker were 6 members of the Wailers, Kent Morrill, Richard Dangel, Mike Burk, Mark Marush, Rockin’ Robin and myself, Buck Ormsby.  The reason we met at this club was the original manager of the Wailers, Art Mineo, performed there with his orchestra and it was convenient for this important meeting.  The discussion around the table was a bit disheartening, as the talk was about whether the band should stay together or part ways.  Hey, I just joined the band and Robin joined just a few months before me, both from the BlueNotes.   The band’s  possible ending arose because parents ordered them to return from New York to finish high school, being their ages ranged from 15 to 17 years.

Now, what to do, as possibilities and opportunities seemed to fade following their several dates tour, which included appearing on the Dick Clark show and Allen Freed show In support of their recent hit “Tall Cool One” and the follow-up “The Fabulous Wailers” LP.   The decision to return to Tacoma and the Northwest wrangled their record label Golden Crest owner, Clark Galehouse.    The label lost interest, and recording and touring again appeared to be a lost dream.

“I loved these guys, I loved the music, the talent, and the experience to be in the Wailers was to me like a dream, and talk of it all ending was not a reasonable solution.”

O.K. O.K., let’s talk about how we can keep it together and make a plan.  The Wailers have a great rep, lots of fans, and who says we can’t record, or tour, or perform. 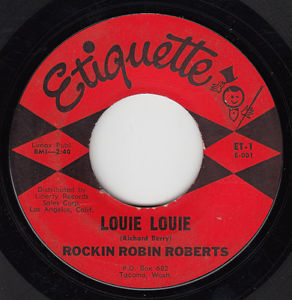 Several suggestions and ideas were thrown in the mix, and finally I just said let’s start our own record label.  Everyone looked at me like I was crazy.   We can’t do that, no musicians own a label was the comeback.  We just performed this last Friday and Saturday, had our pay in our pockets, and I followed with I’ll put my money on the table towards forming a label.  Everyone around that table was asked if they would join me, and only two dug in their pockets, Kent Morrill and Rockin’ Robin joined up.   We agreed to form a record label.

Next, what should we call the label.  We came up with several ideas but none seemed to be the magic one.  Trying to come up with a logo to fit a name was another challenge.   Finally I sat down one day and drew what I thought our label should look like.  I added a name to it, Etiquette, together with a little man in a top hat and a cane.  Thought it would add a little sophistication to it.  I presented it to Kent and Robin and they agreed.  We gave it to a graphic artist in Seattle and he gave it a clean look.  Etiquette was the final.   I still have the original drawing.

Okay, what are we going to record for our first single.  We couldn’t afford to do an album so a 45 single record was going to be our first release.  It was a no brainer, after seeing the unbelievable crowd responses to one song performed by the Wailers with Robin doing the vocals, we decided on “Louie Louie”.   It was Robin, after hearing a live performance Jamaican beat version of the song by Seattle artist Ron Holden, the Richard Berry song lost in the late 50’s, to get the lyrics, found a copy in a 10 cent bin in the Tacoma record store where he worked.   Rich Dangel and Rockin’ Robin re-arranged the song into the first rock version.   The Ya, Ya, Ya’s and the line “let’s give it to ‘em right now” were Robin’s adlibs inserted into his performance of the song.

In late 1960 the Wailers and Robin went into engineer Joe Boles West Seattle studio and recorded both “Louie Louie” for the A side, and Ray Charles “MaryAnn” for the B.

“But, now there was a pending problem that slowed us down.  The Wailers were still under contract to Golden Crest Records in New York.  We couldn’t release the record as the Wailers.  Already at the pressing plant in LA, we had a dilemma.  It would either have to be released as Rockin’ Robin Roberts or not at all.”

In early 1961 I happen to be in Seattle visiting Dolton Records and heard my friend and former band member Little Bill recording “Louie Louie” in the studio in back of the building.  Solution solved.  We agreed it would be released under Robin’s name as the artist.  The label copy was sent to the manufacturer and our first 45 single was released early 1961 on Etiquette Records.

This was the beginning of Etiquette Records.